Paper(s) as epistemic carrier of knowledge 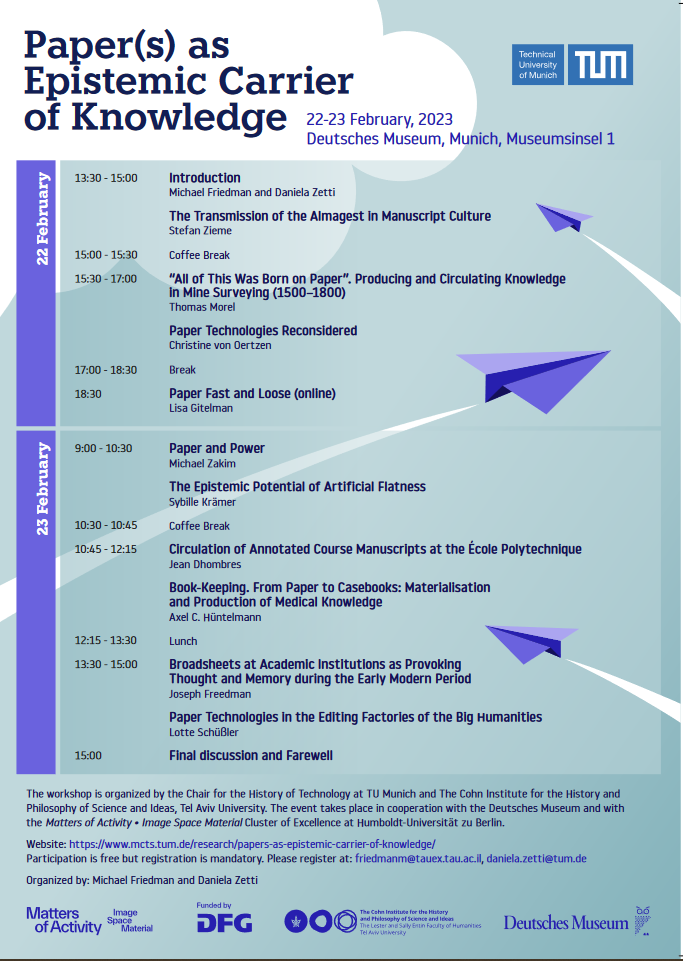 A history of provoking thought and memory

Paper has long been seen in our digital century as a disappearing medium. While its continued centrality for note-taking, scribbling, and as a material
basis of expressing thought is recognized in the recent literature, today’s
final products of scientific publication processes – downloadable files and e-books – steadily transform paper’s character as a collaborative and
collective carrier of knowledge. Paper’s epistemic functions are thus individualized and marginalized – functions which were once essential for thinking with and at the same time on paper.

While we can strongly doubt that paper is disappearing from our lives, we should ask all the more how its character is changing, particularly also given how its very material basis is increasingly challenged by media ecological disturbances in its logistic chains. The workshop aims to discuss these issues in a historical perspective – i.e. discuss what it means and meant, to think with and on paper. Here thinking with does not mean necessarily a conception of a scholar, who is alone with his scribbles and a piece of paper, but it means much more thinking about paper as a communal object, which is circulating between authors and readers or between certain communities, collective actors and individuals who do not necessarily belong to the same social groups. One may take as an example the numerous notes, drafts and pieces of paper, which were found in Gottfried Wilhelm Leibniz’ library and Nachlass; those circulated among his colleagues, were copied and restructured, thus prompting new ideas and at the same time changing their function. Paper may be therefore also regarded as the subtract per se of a “trading zone” between groups of actors, as every such encounter between these groups may prompt a reconsideration of paper and what it carries. By thinking on paper we mean not only the concretization of acts of reflection on the paper (in form or writing) but also, that to use papers as epistemic objects implies material, technical, economic, physical and intellectual conditions that, depending on the context, have to be accepted, rejected, or can be changed. The desks of the present, to give another example, are involved in paper based processes of communication, storage, and deletion, and at the same time they are the site of digital processes that are administratively prepared and operated. In this interplay and co-creation of paper and digital media, relationships and collaborations have recently been changing and are challenged, such as those between author and publisher or researcher and archivist.

Summing up: the workshop aims to think on paper as an object of circulations of knowledge and of practices of enabling and transforming collective memory. Paper here should be however considered in plural, not only due to the various functions it had and has, but also since its characterization as an epistemic object. This consideration enables new research questions and marks problems without necessarily supplying answers. This epistemic character also changes over time: when paper was scarce and highly unavailable, every piece of it should have been used; at other times, when it was more abundant, its epistemic character changed, and one may suggest that scribbling, editing and re-editing of manuscripts became more abundant. How are these transformations to be seen in the natural sciences, in the development of technology and in education? How did the character of the paper as an instrument for thinking and memorizing change in history? And can one consider paper as a changing border between materiality (paper) and abstraction (thought)? We thus especially understand paper as a material foundation to human expression, capable of provoking thought.

The Transmission of the Almagest in Manuscript Culture

“All of This Was Born on Paper”. Producing and Circulating Knowledge in Mine Surveying (1500–1800)

Circulation of Annotated Course Manuscripts at the École Polytechnique

Book-Keeping. From Paper to Casebooks: Materialisation and Production of Medical Knowledge

Paper Technologies in the Editing Factories of the Big Humanities

The workshop is organized by the Chair for the History of Technology at TU Munich and The Cohn Institute for the History and Philosophy of Science and Ideas, Tel Aviv University. The event takes place in cooperation with the Deutsches Museum and with the Matters of Activity • Image Space Material Cluster of Excellence at Humboldt-Universität zu Berlin.

Mail: friedmanm@tauex.tau.ac.il, daniela.zetti@tum.de - participation is free but registration is mandatory. Please send us an email to register. Thank you!