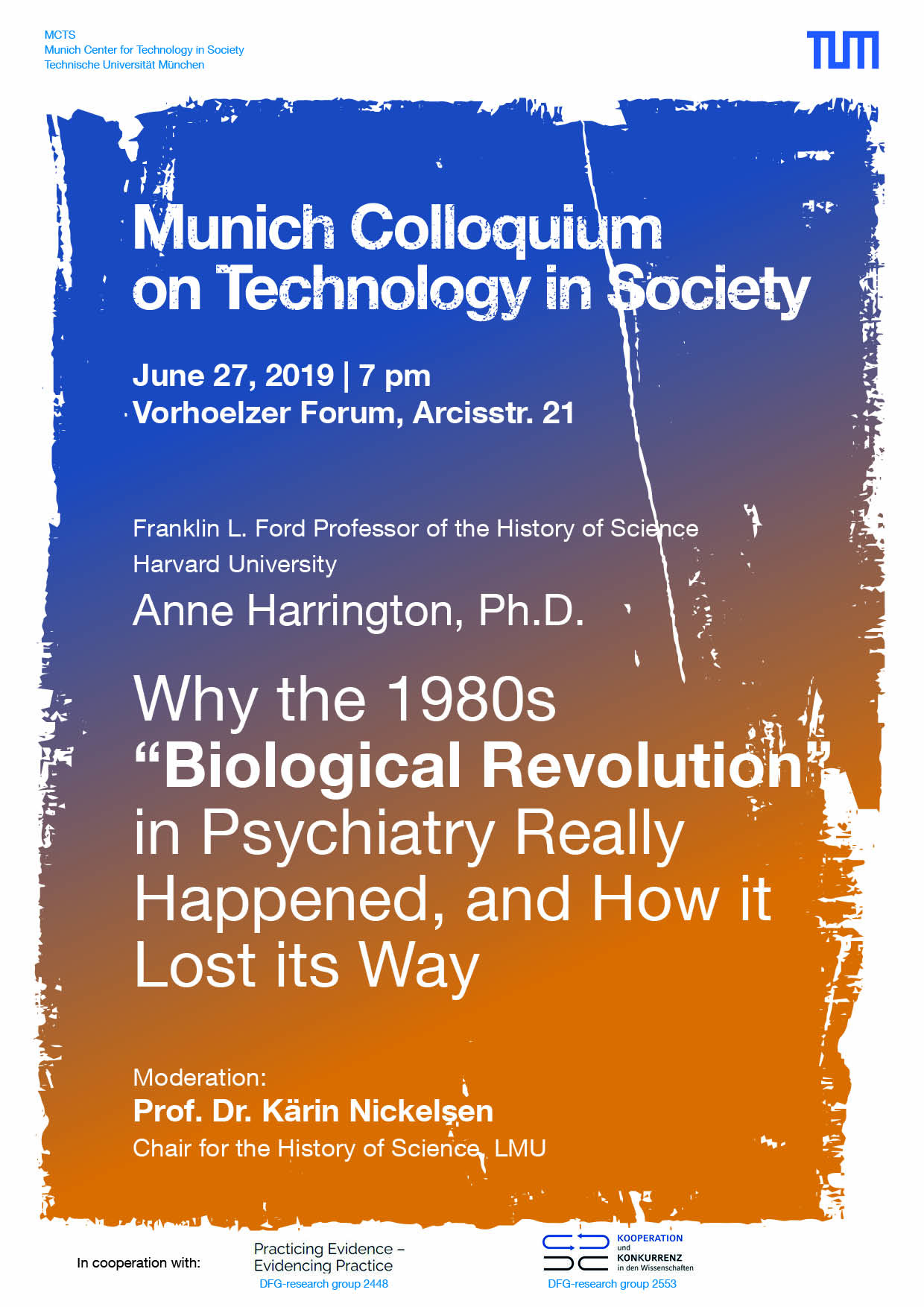 Munich Colloquium – Prof. Dr. Anne Harrington
We are delighted to announce the next Munich Colloquium on Technology in Society:
On Thursday, Jun 27, 2019, Anne Harrington, Ph.D. (Franklin L. Ford Professor of the History of Science Harvard University) will give a talk on ““Why the 1980s “Biological Revolution” in Psychiatry Really Happened, and How it Lost its Way” (7 pm, Vorhoelzer Forum, cf. poster attached).
In the early 1980s, American psychiatry declared a biological revolution. The Freudian ideas, that had dominated understanding and treatment since at least World War II, were denounced as unscientific and retrograde. Drugs, brain science and genes were declared the future of mental health care.
More than thirty years later, there are clear signs that this so-called revolution is running into the sand. Far from flocking to psychiatry, many pharmaceutical companies have been fleeing it. The diagnostic manual on which profession has rested so much of its biological authority has come under sharp attack, not just by cranky outsiders but by informed insiders committed to the mission.
To understand why this has happened, we need to rethink our understanding of the events of the 1980s and beyond. A revolution was declared, but the period was not marked by any revolutionary new scientific understandings. The call to “revolution” was instead a way of rhetorically summoning a new vision of psychiatry’s identity and destiny into existence. The challenge is to understand why it was summoned, and all the ways in which it became a critically important belief system under which all sorts of stakeholders carried out—and still carry out—their business. Only once we understand that can we understand why it left behind such an unsatisfactory legacy.
The Munich Colloquium on Technology in Society is designed as a series of public lectures. These lectures will be held by important figures in the area of Science and Technology Studies and explore key issues at the crossroads of science, technology, society and policy.
Sounds interesting? Please save Jun 27, 2019, 7 pm, and come along to Vorhoelzer Forum.
We are very much looking forward to welcoming you!
Best wishes,
The Munich Center for Technology in Society
In cooperation with two DFG research groups:
2448 practicing evidence – evidencing practice
2553 cooperation and competition in the sciences
+ zu Google Kalender hinzufügen+ Exportiere iCal