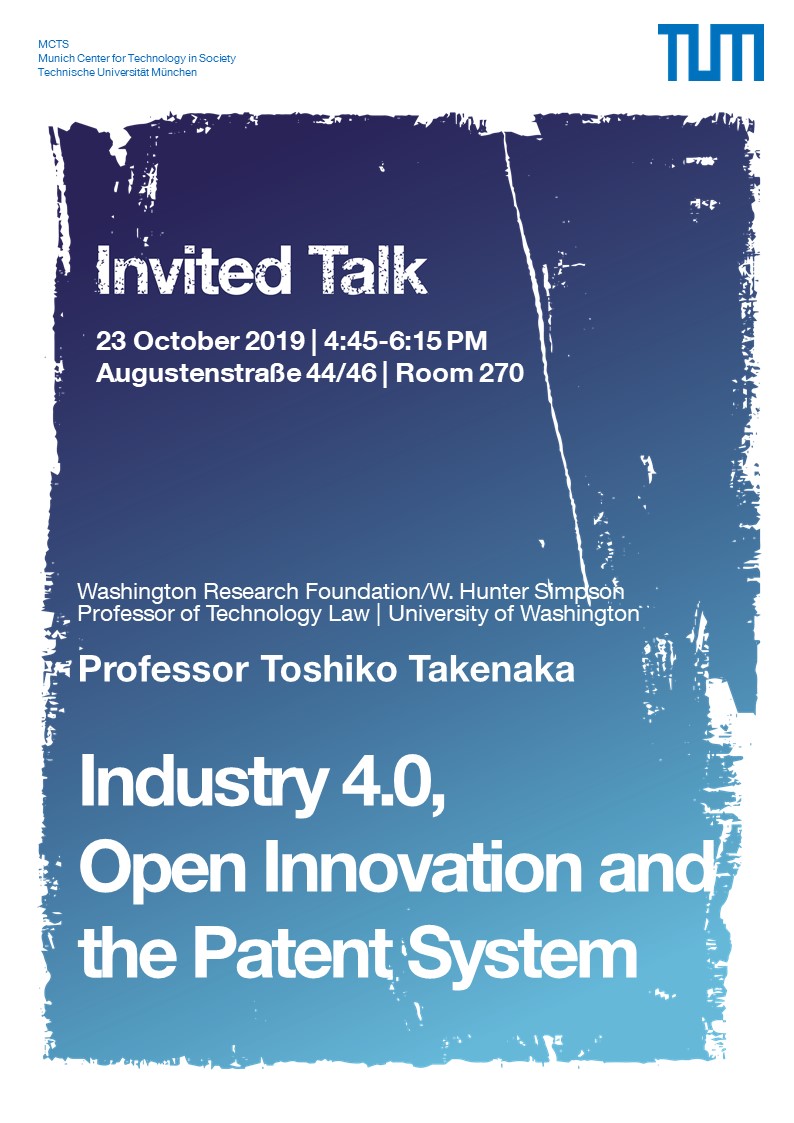 She has published numerous articles and books on US, European and Japanese patent laws and is the main author of the book entitled “Patent Enforcement in U.S., Germany and Japan” (Oxford University Press, 2015.) Prof. Takenaka is currently a member of the board of editors for Journal of Intellectual Property Law and Practice, Intellectual Property Committee within Japan’s Ministry of Economy, Trade and Industry’ Industrial Structural Council and patent examination standard committee at Japan Patent Office.

The emerging technology in the Industry 4.0 era has largely affected commercial firms’ innovation processes. The complexity and cumulative nature of emerging technologies under the post-Internet era has made commercial firms reevaluate the innovation process and has increased the role of individual innovators. As such, the current patent system in the United States has become increasingly outdated for failing to take into account the new uses of patents and motives of innovators. Although commercial firms and the patent system alike have implemented new procedures in light of complex technologies, they still fall short. Patent reform is necessary to overcome such short-comings. In light of recent changes, this article proposes a new utilitarian theory for patents: the incentive to share, a new utilitarian theory that addresses the current innovation landscape, key players, and economic rationales of the patent system. Under the incentive to share theory, innovators can use patents as inclusive rights to engage in open innovation. The proposed inclusive patents allow anyone who shares their patented inventions, for practicing and innovating on the patented invention,  to defensively enforce their patents on a limited basis, which will deter patent litigation and encourage settlements by using the patents as legal bargaining tips for cross-licensing. Owners of such patents are rewarded with the freedom to operate and innovate through  compulsory licenses against blocking patents. The article urges a reevaluation of U.S. patent rights in light of new patent uses. It views patent protection as a property right, with the right to use and share inventions rather than merely a tool to exclude others. The proposed theory is better in embracing the open source philosophy that serves as the foundation to the current technological landscape.