Did you ever wonder how developers know what their future users want? Well, often they just don’t know and really funny stuff can happen during development and after release. I 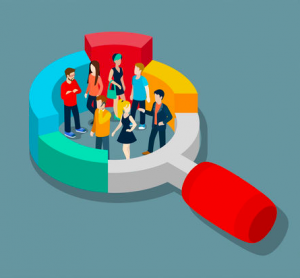 f you ever downloaded a so-called day-one patch, you have a vague idea of what I am talking about.

There are some ways and ideas how to prepare for some of the unforeseen design issues that can arise during and consecutive to a software development process. One possible way to tackle such issues in advance and improve on usability and attractivity of product is to conduct a so-called focus group. It was my task and pleasure to support our EIT Food ReDiT project partners at the University of Reading doing some user research. Thus, I enjoyed a great working stay there;  let me tell you a little about it:

Software interfaces can be fun, and in several cases they are intended to be fun, regardless of a user being just passionate about software or not. This particularly applies to citizen science projects. However, our project is rather similar to citizen science (one might also feel reminded of “prosumerism”, where consumers also act as producers), it is not the classic case of having people looking for stellar constellations or possible DNA permutations. Our research requires the very knowledge of consumers. After all, that’s what our project is about, research-wise, and its means of research will be implemented with the digital toolkit we are developing to get people engaging with the software, learn about health claims, and provide us with their valuable feedback that we hope will allow for some instructive insights concerning communication between manufacturers and consumer as well as higher-level administration and policy making.

Thus, it is important to us that the application we are creating is appealing to its users; that they get some knowledge and interest in the topic, and simply have a good time using our digital toolkit.

But it is one thing to mock up an interactive software that serves users’ and our demands, and another thing to amend it towards particular preferences of user groups. For, you know, everything you create for such a purpose will look mindful and reasonable – after all, it is your product – and it is pretty hard to spot possible flaws and less nice and useful, or even problematic features and qualities. 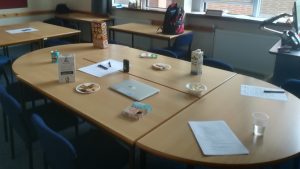 Therefore, we conducted once more some focus groups – as they already did at the University of Reading to get a first impression on consumers understanding of health claim, what they already knew or believed to know, also what they wanted to know, and how they react or don’t react toward specific styles of food package design) The focus group is a method known and broadly used in marketing, design, and requirements engineering. We invited old and new faces, mothers, health conscious men, students, and elderly people that care about aging well, and discussed the draft of our digital toolkit. They gave us a lot of interesting ideas on how to improve what we had so far, and pointed out which parts might work in a different way, as intended. In development, one can tend to assume very compliant users, while often the truth is that users are more interested in messing around with the provided possibilities of a software. Hence, the provided input and critique from the focus groups were highly appreciated. We tried to gratify their essential contributions with some nice snacks during the focus groups and the vouchers we have promised them as a little incentive.

Nevertheless, one should not miss the fact, that focus groups are tough methodological work. There is much more to them then just protocolling different remarks into an executive summary. The recordings have to be transcribed, and, as we do in social science, that in full detail with all interruptions, para-lingual events like coughs, and so on and so forth. The result is then called a conversational analysis transcripts (CAT). Many disciplines may find that quite odd, but as the socio-scientific partners of the project we try to provide a further methodological control, assessing the content and context of the mere textual substance – and might find further insights on issues of serious games like ours, games that are fun but also produce and teach something. But this part of the project is still in progress.

After all, you might wonder if such a focus group is actually a suitable and sufficient method to assess flaws with a prototype and, furthermore, to get a representative idea of your future user groups. Well… you do not. The results of focus groups have to be curated rather based on expertise and discussion then on an established methodological standard. However, while focus groups may fail to represent full populations of potential users, but, as I said, they give you some ideas about them, their most important feature is that they can highlight problems and flaws with your product, that are less an issue of representation but of technological concept. Like our focus groups pointing out that they would have more fun creating funny health-claims with our toolkit than such they would find appealing themselves – as we instruct them within the toolkit. And this is double layer problem. Not only is there a real risk of data thus being compromised, it also opened the question if such funny and irritating health claims would actually fail their goals, at least marketing-wise… Thus, even further research is required and that is where we as STS researchers come particularly into play.

Of course, we already summarized the impressions we could collect during the focus groups and mocked up a first executive summary for the development team within the project. Since there were a lot of contradicting suggestions, remarks, and critiques given by our focus groups, we had to make some rather intuitive, experience and interest led, decisions on which we would take into account and which not. And while this is a particular problem with focus groups, we believe that STS and sociologically inspired methodology in particular, may help to sort out critique artifacts and even hidden, sublime information that might be important for the assessment of the impact of our product and to further instruct policy makers as well as preparing some means of reflection, maybe some irritations within the software that would not interfere with the flow of use, but remind that nutrition and health are difficult topics and raise awareness for individual requirements over rather epidemiological knowledge and politic-bureaucratic processes of regulating health-claims concerning content and layout. However, we will have to see how this works out but we are already busy preparing our data and getting deeper into the discursive intersections of serious games, health claim bureaucracy, and user interests, qualities, and quirks. 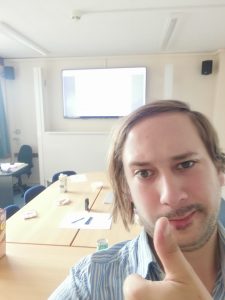 So you see, such efforts happen in the background of a properly grounded interface design and functional layout. As the social scientist of the project I was delighted to be invited to support this important step in research and development, and as our participants seemed to enjoy a great time discussing design issues and possible use-scenarios, I enjoyed my trip to Reading just as well!

Ah but one more thing: especially interesting was the mini designathon we added to the end of the focus groups. An activity in which participants were invited to invent additional ideas for games and activities which could be implemented with our product – without any restrictions. It is funny how this often still ends up with rather mundane ideas instead of letting the cows fly. However, we ended up with lots of funny and intriguing ideas that could inspire later developments and provided us with a good impression of different user interests and attitudes. And I really did not expect to find myself, once again, surprisingly confronted with further insights, arguments and observations concerning my PhD thesis. Oh, I guess it is calling already.

In Conclusion: The focus groups were a complete success: productive, intriguing, fun – for participants like facilitators. So if you have the chance to join one of those ominous “focus groups”, you should definitely consider it!