Debating the ‘update-mode’: an update.

Another day, another update. In digitized societies we are used to updates, they happen on our phones, computers, routers, gaming consoles, all those devices that ha 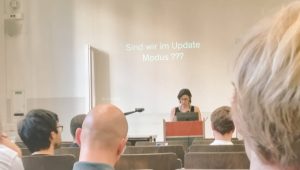 ve become a part of the so-called internet of things, and more… This blog post alone will probably have been updated a few times (at least for SEO reasons) when you read this. Along with them they bring pleasure and pain, bugs and features, security fixes and flaws, and often one does not simply know what they do. They can provide desperately desired advancement, or they seem to just block you for ours from your working place… However, against the background of these rather empirical cases of updating, we might wonder: can updates be qualified as a societal paradigm for society and human sciences in general? Was there a time before the update, when history was rather a sequence of releases, recalls, and supersession? Are we living in a ‘patch’-worked social world of continuous, experimental, tentative, incremental updates? Are updates an end in themselves? Do we still feel comfortable with things that do not update in some way? This idea might go well if you think about the cybernetic turn; updates thus appear as a natural feature of the feedback loops that multiply along the growth of information technologies and infrastructures. Thinking of media technology, it just makes sense empirically; with more and more digital, online networked technologies (which are, again, involved with social entities, activities, institutions, and practices), the updates penetrate the social world simply through matter and media.

Nevertheless, a cynic might provoke: when was there no update? Is our history of thought not a history of updates, of quotes and iterations? Incremental innovation taking place in all history, in all places, and all fields? History might seem to highlight the greater events and occasions of change, but we would not negate the possibility of disruptive innovation for our contemporary life worlds, would we?

Eventually, you will find it to be, above all, an issue of perspective. Book printing is a great change, and electric, almost real-time and long-distance communication, might have been of an even greater impact. However, if you observe society as a place of communication, nothing changed. Professional cynics might indicate to you, that the idea of reading the future out of black boxed machines is not that new compared to practices of observing the flight of birds or reading from some animals organs. At least you will find, through all history, people who were really obsessed with predicting technologies (or magic). Flying cars are a disruptive innovation for automotive industry, but probably not that much of a change for platform based passenger transport business; while self-driving (or -flying) cars will have a huge, disruptive impact on that market. The same applies for the update term or paradigm itself: an ‘update-update’ can be found, if you look for it, but it is no necessary insight or interpretation.

The debating series “Update-Modus” aspires to deepen this discussion. Its first event “Aus den Fugen – alles im Lot: Ordnungen” (i.e. out of whack – everything’s straight: on order) asked for the theoretical value and terminological utility of “update” for humanities. Invited for this first session of the debating series were Monika Dommann, historian, Armin Nassehi and Sabine Maasen, both sociologists. Since the modus of this event wasn’t actually updated, all discussants started with an initial talk, before the start of the actual debate between the speakers and the auditory. Thus, Dommann started raising the pending question whether ‘update’ could be regarded as a history concept; following markers like revolution or saddle period. And just like these terms, update can be considered a historic concept, and might be found within the industrial revolution and in the movement of thought during the saddle period. Nevertheless, a great inertness of contemporary society can be found that make updates appear a rather micrological phenomenon that does not actually touch the greater infrastructures of politics, education, and economy. But time will tell us more on that, I guess. Nassehi followed this talk with an emphasize of this contemporary, or general, inertness. He presented the classic system theory idea, that tentative changes, experiments, i.e. updates, are only feasible against a solid background of stability that could ground and enable interventions, deviances, and micro-changes. He, thus, highlighted that updates were more a semantic feature than a real structural change. Hence, we should not fall idiosyncracies we designed ourselves and hold on to a broader view on the relation between order and change, continuity and breach. Having said this, he recalled the hastly rise of the digitality metaphors in humanities (which he served once himself). He illustrated the postulated tandem of order and change with the, alleged, wonderment of postmodern feminists who liquified gender categories only to find that social realities do not change in a tangible way. Once more, I believe that one’s agreement or disagreement to this statement depends a lot about who you ask; there are subjects living with us for who the political work and, let’s say, feminist updates, may be an even disruptive event. However, the intro talks were then completed with Maasen’s presentation on updates and innovation culture, and the helix shaped entanglement between innovation processes and legitimization discourses which can be regarded as our contemporary, societal DNA; performing a continuous, reciprocal exchange, or ‘update’, on each side: industrial innovations evoke labor innovations, vehicular innovations evoke new mobility politics and infrastructures, and so on and so forth.

So much (many?) update(s) for now. The following debate was not that controversial in particular, but featured a common insight: Updates always require an environmental order that can bear the update-induced concussions; concluding that things getting out of whack necessitates both, that they have been ‘in whack’ before and that there is enough surrounding order so that things can afford perturbations… Beyond that, the discussion revolved around the impossibility of an universal sociological paradigm and the arbitrariness of single-case descriptions. The social worlds are many and diverse and you will always find examples that will not obey the stated paradigm, may it be differentiation, modernization, axial time, or whatever you can think of. And what can be regarded as an update will only emphasize a part of a phenomenon, like any terminological tool; a field study of a factory will deliver different results depending on whether you apply Marxist concepts like estrangement, focusing on processes of capital accumulation and stabilizing inequality, or a system theory approach looking for the arbitration of organizational oppositions. Nevertheless, update, as an analytical concept, might be capable of highlighting the particular entanglement of structural order and shifting practices. Thus, I’d like to close this blog post following the closing statement of Sabine Maasen: You may start your journey with the update figure, looking for its empirical appearances and theoretical capacity, but driven by its research impulses, you will probably end up with something else. Something, however, you possibly would not have found without it.

People who completely read this blog post are also interested in the next upcoming sessions of the debating series ‘update-modus’. So you probably don’t want to miss out the

25.06.2019 when Sven Opitz, Thomas Mergel, and Stephan Lessenich are debating the temporality of update-societies;

08.07.2019 featuring Kristian Kersting, Andrea Mennicken, and Paula-Irene Villa who will shed some light on customization and calibration;

All events are in German language.